Home / World / Weather mudflow in the village of Switzerland 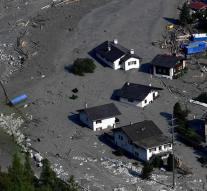 amsterdam - The village of Bondo in Switzerland has again faced a mud flow. Earlier this week, eight people from Switzerland, Germany and Austria were missing.

According to the police, people who were evacuated before, and then could return, left their house again.

Rescue workers are currently searching for the eight missing, who have been searching for Wednesday since the first earthquake (video). The ravage was then great: about one hundred people were evacuated.