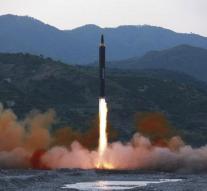 seoul - North Korea has tested a rocket on Sunday. The South Korean army announced on Sunday that a projectile was launched from a base at the Pukchang site.

It is not clear what type of rocket it was, but it could have been a ballistic missile, according to South Korean media. UN resolutions prohibit the country from testing ballistic missiles.