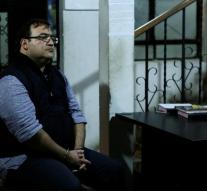 mexico - The fugitive Mexican ex-governor Javier Duarte was arrested Saturday in Guatemala. Police arrested the Mexican in the lobby of a hotel in Panajachel, reported the authorities.

Mexican authorities issued late last year issued an arrest warrant against Duarte, who was the governor of Veracruz state. The former politician from ruling party PRI inter alia suspected of links to organized crime. Would during his reign widely tampered with public money.

Another fugitive Mexican former politician, Tomás Yárrington, ran into trouble earlier this month in Italy. The former governor of Tamaulipas state is among others suspected of having accepted bribes from drug cartels.