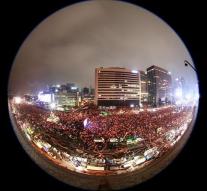 seoul - Again Saturday hundreds of thousands of South Koreans took to the streets in Seoul to demand the resignation of President Park Geun-hye. It was the fifth mass protests in five weeks. The organization estimated the number of participants at around one million.

The protests revolve around a corruption scandal and the impact of a controversial friend of Park, Choi Soon-sil. Choi would have made abuse of her relationship with the president to obtain sponsorship for two private foundations and to enrich themselves. According to the Office of the President Park knew nothing. Park Opponents also complain that allowed her friend to interfere in government affairs while his hold any official position.