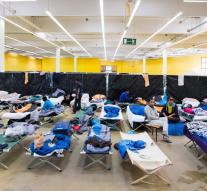 hamburg - For the second time in a week in an asylum centers in Hamburg, Germany a huge brawl erupted . About sixty refugees went Tuesday with each other to blows in the crowded shelter in the district Wilhelmsburg .

The fighters , mostly Afghans and Albanians used include iron bars to beat each other . According to an eyewitness , the police stated that one of the fighters had a firearm with him. There were five people injured. The police came in thirty patrol cars at the reception for things to sussen.Afgelopen week went two hundred Afghans and Syrians with each other to blows in another shelter in Hamburg . It took fifty policemen to make the necessary effort tempers in shelters in the district Bergedorf quieted.