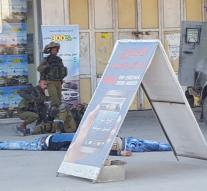 jerusalem - The Israeli army on Sunday killed two Palestinians. The two had attacked a soldier in the West Bank and stabbed. The incident, one in a long series, was at the Hewara village near Nablus.

Since violence erupted in October, 130 Palestinians, twenty Israelis and one American died.