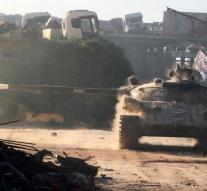 tehran - In the Syrian city of Aleppo is an Iranian general, Ahmad Gholami, in the fight against the Sunni extremists of the Islamic State killed. This Wednesday reported the Iranian news agency ISNA.

Since last year, dozens of members of the Iranian Revolutionary Guards in the battle in Syria slain, including several senior officers. Tehran supports the regime of Syrian President Bashar al-Assad and says that it only sends military advisers to his country. Iran is the main Shi'ite power and fighting in the Syrian civil war, groups of jihadists, of whom receive much support from the Sunni Gulf states such as Qatar and Saudi Arabia.