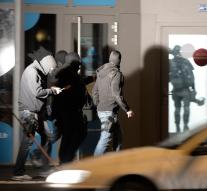 - France remains fierce hunt for terrorists. On the night of Monday to Tuesday were done 128 searches in the country, said Minister of Internal Affairs Bernard Cazeneuve. It is not known whether there are also arrests.

According to the minister at the moment about 115 000 police officers and soldiers in action. In the night from Sunday to Monday was also a major anti-terror operation involving 168 buildings were searched and certainly 23 people have been arrested.