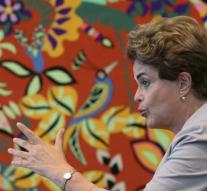 - The impending deposition of suspended Brazilian President Dilma Rousseff is one step closer. The Committee of the Brazilian Senate voted Thursday to regard the initiation of the deposition process in the upper house.

Fourteen members of the 21-member committee voted for the opening of the trial, five against. If the full Senate considered by the committee Tuesday takes over Rousseff must still stand trial this month for exceeding the budget in the hope in 2014 to her re-election safely. In late August, would already be clear whether Rousseff, who is inactive since May, is finally put out of her office.