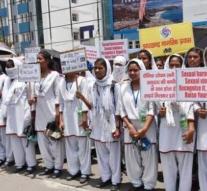 delhi - India has once again been startled by a gruesome murder where a girl was killed after she was raped and set on fire. It is the third time in about a week that something like this happens in India.

This time it was a 16-year-old girl who was fueled and burned in her home in the state of Madhya Pradesh. A 28-year-old suspect has been arrested. According to the police, the girl was killed after she told her assailant that she would inform her family about the rape, reports the BBC.

At the beginning of this week, a seventeen-year-old girl was also raped and set on fire in the state of Jharkhand. She survived it but suffered burns on almost her entire body. In the same condition a 16-year-old girl had died a few days earlier after a similar incident. She was kidnapped, raped and burned later.