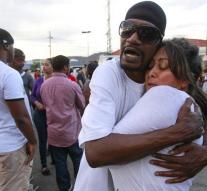 - Again in the USA unrest after police shot dead a black man. The incident was Tuesday in El Cajon, a suburb of San Diego in California.

According to US media this was a man who acted confused and walked between the traffic on the street. When he refused to cooperate with the police and made a shooting motion, one of the officers opened fire. The man was unarmed.

After the incident were angry residents of the city to the streets but that did not lead to violence.

Last week was different in the city of Charlotte in the eastern US There were several clashes between police and protesters after the death of a 43-year-old black man by police bullets.