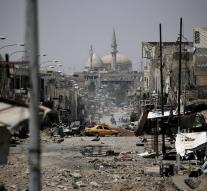 mosul - Iraqi troops resounded on Wednesday in Mosul with warriors of the Islamic State terrorist group. Soldiers and jihadists shattered each other in the Old City, saying two inhabitants. 'We're still living here in an atmosphere of fear,' said a 45-year-old man.

Iraqi Prime Minister Haider Al-Abadi held a victory in Iraq in the second city of Iraq, held for many years by IS. Yet, the terrorist organization has not yet been completely driven out of Mosul. The tallest US military in Iraq already warned Tuesday that hundreds of fighters may still hide in the city.

An Iraqi army officer labeled the last screen protests as 'sweeping operations'. According to the military, IS warriors are sheltered in several places. 'They disappear in one place and dive up somewhere else and then we get them on,' he said.