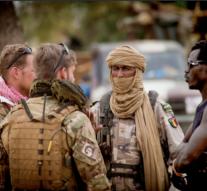 bamako - In Mali, the state of emergency from Thursday reinstated. Who had just finished last week, but after a bloody attack on a military base decided the government of the West African country still Wednesday to extend for at least ten days.

Despite the presence of a UN peacekeeping force, where Dutch troops are part of, the violence in Mali has increased in recent time. An attack by Islamist rebels on an army base Tuesday took seventeen military life. Another 35 soldiers were wounded. It was the deadliest attack in months. The Malian government has declared three days of national mourning to commemorate the victims.

In Mali, are currently stationed some 370 Dutch peacekeepers. They adhere work includes the collection and analysis of information for the UN mission Minusma. This year the mission ends, but possibly there will be a continuation in smaller form. However, it is intended that the Dutch helicopters that are still flying then come back in Mali. They are hard to maintain. A final decision has not been taken yet.


Various warring factions in Mali last year concluded a peace agreement, but violence is never completely stopped. Both Islamic extremists and militias of ethnic groups threaten the weak central authority. About eleven thousand UN soldiers trying to keep the peace in the country.