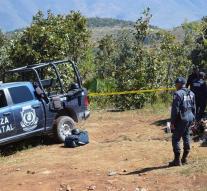 acapulco - dozens of bodies are again found in a series of mass graves in the Mexican state of Guerrero. According to the Mexican public prosecution authorities found the bodies in twenty hidden graves near the site Zitlala.

There are 32 bodies were found and nine severed heads. The gruesome discovery was made when people complained about living near odor. It is not clear how long the bodies were already in the graves. No suspects have yet been arrested.

It is not the first time this week that mass graves are discovered. Wednesday and Monday were already found 15 bodies and nine decapitated bodies. Guerrero is fierce struggle between drug cartels smuggling routes.