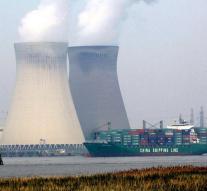 - The restart of the Belgian reactor Tihange 1 has been postponed again because repairs have not been completed. The new date is February 15, made Engie operator Electrabel Monday.

The reactor is shut since early September after when working in a non-nuclear part of the complex a building was damaged. The restart was previously provided on 31 December.

The two nuclear plants in Belgium, Tihange and Doel, both not far from the Dutch border, counting a total of seven reactors. Of these, there are now six in operation.

Minister Melanie Schultz (Infrastructure and Environment) asked the Belgian government last week to consider the temporary closure of the plants. She is very worried about a study showing that the risk of a meltdown in a fire at Tihange would be very large.