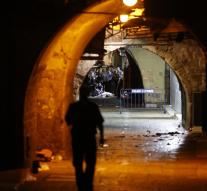 jerusalem - The streets of Israel are still dangerous. Monday fell in a short time two dead and five wounded by stabbings and police bullets. The sad balance after twelve days of violence says 25 Palestinians and four Israeli deaths.

A Palestinian woman a policeman with a knife wounded, hit himself in the center of Jerusalem wounded by police bullets. In Pisgat Zeev wounded two Palestinian men with knives two Israelis. The police shot one attacker dead, the other hit by the bullets wounded. A border guard shot dead a Palestinian who wanted stabbing him down.

Monday night was shot dead a Palestinian in Jerusalem an Israeli soldier attacked a bus. He wounded the soldier and a fellow passenger with a knife in an attempt to make the weapon of the soldier cheat. Moments later, the attacker was shot dead by police.

The reason for the wave of violence is the massive influx of Jewish visitors to the al-Aqsa Mosque in Jerusalem. The mosque is for both Jews and Palestinians, a holy place.