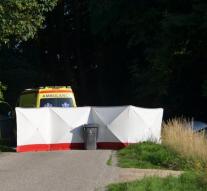 holly - In the Zeeuwse town Hulst, a cyclist has died again on Monday evening, this time after an assault on the Old Ferdinandusdijk. The driver of the car is arrested. The police could not say anything about the identity of both men on Monday evening.

Sunday morning in Hulst in the Zandstraat a 64-year-old cyclist was killed by a collision. The motorist had gone through. The driver has not yet reported.