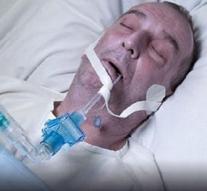 bucharest - Three brothers from Romania are convinced that their father which is printed on cigarette warning to millions in Europe. They want money, but they are not the only ones who claimed to be the man to know the picture of himself.

For example, a Belgian woman went to the media last year because she was sure that it was her husband in the picture. He was six years earlier deceased from a stroke.

A month earlier claimed an Austrian woman that comes to her deceased husband and in September, the 54-year-old German Harald Molter claimed that he himself is in the picture.

The latest claim comes from Romania so. 'The family is fierce,' says the lawyer of the three brothers told the daily Libertatea. 'We're going to court a record amount as damages. '

The photo shows a man in a hospital on ventilators. The image comes from the Directorate General for Health and Food Safety of the European Commission, which sent him to the health ministries in the EU countries.

The European Commission said after earlier claims that a German is the mysterious photo that had given proper permission to use his photo on tobacco. To whom exactly it is not provided, but a spokesman would like to say to Bild that they did not use models for the photos, but they are 'authentic'.