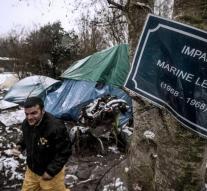 duinkerken - The French authorities have evacuated the refugee camp Grande-Synthe near Duinkerken. There were hundreds of refugees.

The prefecture in Lille called the evacuation to 'safeguard' people. Details and numbers of refugees were not mentioned.

For several years in the northwestern region of France, migrants who travel illegally to Britain have been gathering again. In the Grande-Synthe camp broke, this year's fire starts to burn. At the time there were 1200 to 1500 people. There were ten injured.

In October last year, the massive refugee camp at Calais was cleared by the authorities. In the so-called Jungle there were about 9000 migrants. They were brought to official camps throughout France.