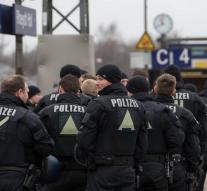 cologne - Police in Cologne once again receive a busy weekend with several demonstrations. Saturday, 30,000 Kurds expected at a demonstration which will be accompanied by a thousand policemen.

Sunday put the corps about the same number of people in a march through the city of the extreme right party Pro NRW. Which coincides with a meeting against leftist groups.

The Kurds see Saturday on a march through the center, but gathering on the banks of the Rhine. They want to demonstrate against the dictatorial behavior,, '' of the Turkish President Recep Tayyip Erdogan. The police announced to make short work of prohibited propaganda.