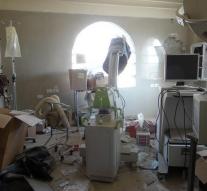 - A hospital west of the city of Aleppo on Tuesday, hit by an air strike. while at least one person was killed. It reports the Syrian Observatory for Human Rights.

Many medical workers and patients in the village Awaijel injured. Among them are some patients who were transferred precisely from a nearby hospital, which was hit by an air strike Monday. That same day, yet another hospital was bombarded from the air.

The air attacks have increased in recent days west of Aleppo territory controlled by Syrian rebels, the Observatory reported. They follow the futile attempt by rebels to break the siege of the areas they control eastern Aleppo.

Human rights groups complain about Syria and the Russian Air Force, assisting the government army. They would harass intentionally hospitals and other civilian targets.