Home / Tech / Weapons sold to Dutch through the dark web 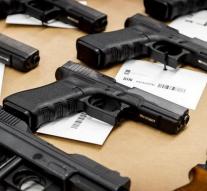 brussels - Europol last week together with the Slovenian police two men arrested suspected of selling weapons through the dark web. They delivered among others to Dutch customers. This was announced by the European police organization Tuesday.

In house searches a large quantity were automatic and semi-automatic weapons were seized. Also, agents found grenades and ammunition.

The trade was operated through the dark web, part of the Internet that is easily accessible and can not be through search engines found. After buyers paid with bitcoins, they were sent by mail to the weapons. Slovenes, 39 and 33 years old, not only delivered to the Netherlands, but also Sweden, Norway, France and Britain.