Home / World / Weapons from the shelves in France 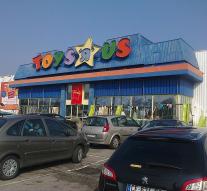 - The toy shops of 'Toys R Us' get in France at the request of headquarters all toy guns off the shelves. The action is an act out of respect for all the victims Friday in Paris have fallen in the bloody attacks.