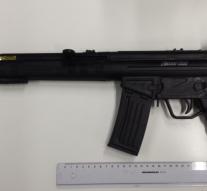 solms - The German police in a garage in place in Solms Hesse discovered a weapons arsenal. Found among other thirty to forty guns and rifles, including Kalashnikovs.

According to police, the owner, a 50- year-old German, not a terrorist but rather a " wapengek " (Waffennarr). Besides the weapons hit the police grenades and about 25 kilograms of explosives. The police arsenal was on the track thanks to an anonymous tip.