Home / World / 'We slipped behind a bar' 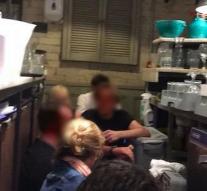 london - 'I've had so much fun. Those guys have entered all sorts of pubs, but not ours. 'That's what the Dutch Bahar tells the drama near London Bridge that played on Saturday night. Bahar has lived in London for several years and would rather not be named with her last name. 'I love my privacy,' she says.

She celebrated last night with her husband that she had passed an exam. We had dinner together in Borough Market, a nightlife area near London Bridge, where a popular farmers market is held during the daytime.

After dinner they had arranged with a couple of friends and drank something on the barrowboy and banker's terrace, a pub she had never been to before. At one point she heard further rumors.

'Initially, I thought it was just some drunk men, but I did not feel comfortable at all. I also heard a sound that looked like glass was broken, I do not know what exactly was. Then a person came screaming that we had to run away. It was all very fast. There was really panic. We were not yet a hundred yards away when we heard the gunshots. I do not know how much it was but more than one. We stood for a restaurant and went in there. We slipped behind the bar. At one point, a military police, with guns, told us we had to go to the basement where the kitchen had to go. We did that. '

Bahar and the others took an hour shift. 'At least it seemed like that. I looked at Twitter to see what was going on, but there were no messages yet. I wrote on Facebook that I was safe in a basement. Only after half an hour or so came the BBC with the first message. It all took so long. Eventually an agent came to tell us that we had to leave this restaurant too. After that we were on the street. The metro was close. There was no taxi to get to know. Eventually we found a bus home. We followed the news for hours and I did not really close my eyes. '

Bahar and her husband had also agreed with another friend on the terrace. 'But that was not yet arrived. We only talked to him when we were home. He turned out to be on the other side of the perpetrators and ran exactly the other way from us. He told him he had seen some bodies lying on the street. '

Since the attacks of years ago, Bahar is always a little aware of the danger of the subway. 'But I never really thought that I would be so close to an attack. I say to myself every time: I could have been that. They think that one of the perpetrators had a belt. Of course, that could have just gone down when he was shot down. And then we were probably also hit. That makes it all very frightening. '

In addition, I have great respect for the way the police responded. We walked away but they have to go down. It was all very well organized.