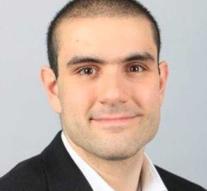 toronto - The suspect of the attack Monday in the afternoon in Toronto, with at least ten deaths and 15 injured, has been identified as 25-year-old student Alek Minassian, from a suburb of Toronto.

Minassian was arrested without violence by the Canadian police after he zigzagged about two kilometers across a sidewalk in Toronto and hit dozens of people. According to police commissioner Mark Saunders, it seems that Minassian consciously entered pedestrians. No shots were fired during the arrest.