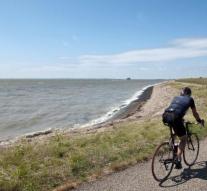 the hague - The 22 water boards in the Netherlands collected 60 million euros more taxes last year than in 2015. They raised 2.7 billion euros tax, an increase of 2.3 percent compared to one year before.

That's calculated by Statistics Netherlands on the basis of the annual accounts of the water boards, reports the statistical office on Tuesday.

The amount is much higher than the 26 million euro revenue increase initially estimated. For the construction and maintenance of dikes and sufficiently clean surface water, 1.4 billion of levies were imposed. For water purification, the water boards charged 1.3 billion.

The water boards also invested heavily in land, road and hydraulic works. As a consequence, their assets increased to almost 9 billion euros.