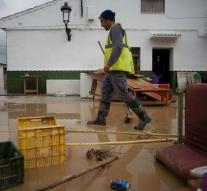 marbella - Dutch on the Costa del Sol with severe water damage by the heavy rainfall of recent days, may appeal to the disaster fund. The insurance agent says Rob van der Zee from the southern Spanish resort of Benalmadena.

' That we do not know in the Netherlands and in Spain carries all through his home insurance about 7 percent to the fund, '' he says. ' It was founded sometime in Spain to assist financially the population to natural disasters such as earthquakes and floods. My experience is that the damage is paid rapidly. To my knowledge, Spain is one of the few countries in the world with such a disaster fund. ''

Also, many Dutch people on the Costa del Sol with (second) homes contend with flooded basements, homes and garages. They can thus receive financial compensation.