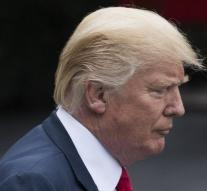 washington - The US government wants to know who visits an important anti-Trump site. The Ministry of Justice has asked DreamHost for all information about the disruptj20.org site, its administrator and the visitors. DreamHost claims to have rejected the request.

According to the company, it is an unquestionable request that puts the freedom of expression and association of everyone at bay. The Ministry of Justice in Washington has now gone to court to force DreamHost to provide information. Next Friday there is a hearing.

The name of the site refers to January 20, the day Donald Trump took the oath and became official president of the United States. Around that day there were some great protests like disruptions20. Org, but also from other groups.