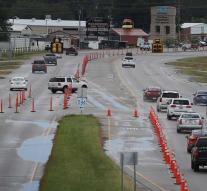 washington - The US capital Washington DC is preparing for the arrival of hurricane Florence. In the city the state of emergency has been proclaimed, following the nearby states of Virginia and Maryland, according to the Washington Post newspaper.

'We are obviously preparing for the arrival of hurricane Florence,' said Mayor Muriel Bowser during a press conference with leaders of police, fire brigade, public transport and public works. The state of emergency is effective immediately. In January 2016, that was also the case in connection with a heavy snowstorm.

Meteorologists expect that the capital will mainly have to deal with a lot of rain, for three or four days. The measures are mainly focused on this. Gutters on the street are thoroughly cleaned. Employees will be on the alert if during the storm there is a hiding of drains.

Measures are also taken with regard to public transport. The expectation is that all traffic can continue as usual. However, pumps, sandbags and generators are available for use. Electricity company Pepco keeps mechanics behind hand if malfunctions occur.

Residents are advised to receive their medicines in time, just like flashlights and batteries.