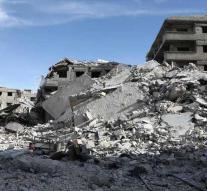 beirut - The Syrian state television reported Friday that fighters and their families have started with the departure from East Ghouta. In this heavily besieged and bombed enclave east of the capital Damascus insurgents still serve the service.

The area that control the opponents of President Assad is getting smaller.

The TV showed images of people getting into a bus. The correspondent said that they were militants from East Ghouta who had come to the side of the Syrian army via the al-Wafideen crossing.

Earlier in the day, the Red Cross announced that a convoy of thirteen trucks could deliver relief supplies in Douma, the largest city in the surrounding area.