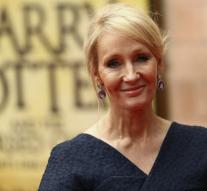 - There are five films of the Harry Potter spinoff 'Fantastic Beasts and Where to Find Them.' That made book writer and screenwriter J. K. Rowling announced Thursday.

Fantastic Beasts and Where to Find Them is November 17 premiere. The film, whose main role is played by Eddie Redmayne, is about the adventures of Newt Scamander seventy years before the events in the Harry Potter films carry out investigations to write an encyclopedia about magic animals.