Home / World / 'Warmest winter ever at the North Pole' 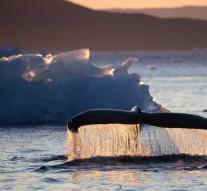 nuuk - It is the hottest winter ever measured at the North Pole and scientists are therefore very concerned about it. The experts have never seen anything like this. 'This situation is just crazy.'

Mark Serreze, director of the National Snow and Ice Data Center in the American state of Colorado, has been studying the North Pole since 1982. He and his colleagues are concerned about this new heat record. 'These heat waves... I've never seen anything like that,' he says to The Guardian.

On Greenland is the northernmost weather station in the world, Cape Morris Jesup. In February, the station measured more than 60 hours above freezing. For this winter it was only twice before that the temperature was above freezing, the scientists know. In 2011 and 2017, however, this only took a few hours.

On February 19 and 20 of this winter, the temperatures were above the freezing point more than 24 hours apart, while the average at the North Pole in February- the coldest month- is usually at-30 degrees. As a result, the sea ice is declining sharply. In fact, there was even a low record.

'New sea ice is still forming. But that is all much thinner than normal. It will also melt much faster and easier in the summer ', Serreze concludes.