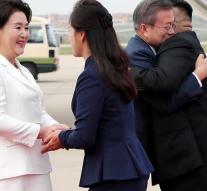 seoul - South Korean president Moon Jae-in was welcomed at the airport at Pyongyang by Kim Jong-un. The North Korean dictator was waiting for Moon when he stepped off the plane. The women of the two leaders were present.

Hundreds of North Koreans were also in suits and traditional robes ready to surprise Moon, swinging flags and flowers. In a black Mercedes, Moon and Kim drove to the villa where the South Korean president will stay for three days for the Korea summit.

Part of the visit is broadcast live on television in South Korea. The South Korean president said on Monday that he wanted to have a frank discussion with Kim, whom he had met twice before. He is accompanied by South Korean politicians and top figures from the business world.

Moon has set itself the goal, among other things, to facilitate the negotiations on denuclearization between the United States and North Korea.