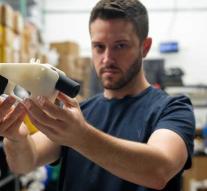 taipei - The well-known American gun fanatic Cody Wilson, who is suspected of having sex with a minor, was arrested in a hotel in the Taiwan capital Taipei. That's what Taiwan media report on Friday.

The Texan is the founder of a company that wanted to distribute blueprints for making plastic firearms with 3D printers. The American authorities issued an arrest warrant against Wilson this week. He would have paid a sixteen-year-old girl for sex in a hotel last month. The gun fanatic boarded the plane to Taiwan after being told that the police were investigating him.