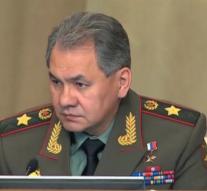 moscow - Buildings of the Russian Defense Ministry left without electricity in the east of the country. The electricity has been cut off the power supply because the department has not paid the bills message The Moscow Times Friday.

Energy DEC has disconnected due to unpaid bills of over 178 million rubles (approximately 2.8 million) fifteen buildings. These include for offices, warehouses, garages and workrooms in the Amur region. If the Department does not have owed rubles, the light goes out later this month at a further 75 locations.

DEC only promises to turn off the power at secondary ' 'facilities so that the measure does not affect national defense. The company said in a statement to be in talks with the ministry.