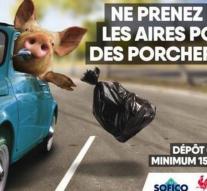 brussels - The Walloon government prematurely with a campaign against litter stopped after she was flooded with angry emails and phone calls from Italians, especially owners of a Fiat 500. They reacted angrily on posters hanging at rest areas along the Walloon roads.

Then showed a pig behind the wheel of a light blue 'Topolino' while it throws a garbage bag out the window.,, Confuse stops along the highway not pigsties, 'stood by. Especially members of the 'club Fiat 500, which has 21 000 members in Europe, sounded the alarm.

The Italian ambassador in Belgium Walloons had sought to remove the posters, 200. About the offending posters are pasted from other new traffic campaign.