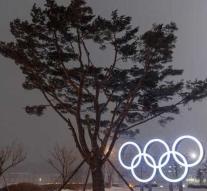 seoul - South Korea allowed athletes to fly to a training camp in North Korea. It has been granted exemption from US sanctions against its neighbor.

A delegation of 24 South Korean skiers went to North Korea on Wednesday to train. They will do so together with the North Korean team in the coming days, in preparation for the Winter Olympics in PyeongChang. An hour before the South Korean plane left, the United States granted the exemption to the airline with which the athletes traveled, reports South Korean media.

The US President Donald Trump, who was once again vigorously defending Communist North Korea during his State of the Union in September, imposed a package of sanctions against the country in September. Part of this is that airplanes 180 days after they have been in North Korea can not come on American soil.