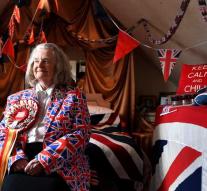 london - Of course Margaret Tyler should not be missing at the birth of a new royal prince. The 74-year-old inhabitant of North London is called the 'most loyalist royalist' of the United Kingdom. And so she is 'so excited' with the birth of a new prince.

Tyler waits patiently as a careful sun breaks through London's ST. Mary hospital where Catherine gave birth to a son a few hours ago. She knows from experience that it can take some time before the royal couple with the new shoot to the trunk comes out. But Tyler is patient. She does not want to miss the first look of the extended family for no gold.

She has pretty much let her know about it, the past few weeks. At the birth of the other children of William and Catherine she was present every day. But now she has been very busy with the coming royal wedding of Prince Harry and his fiancée Meghan Markle. 'Everyone wants to take a video with me. I go up and down continuously to Windsor, she says. I look like a movie star. '

The Rotterdam-based Jan-Willem Weijers is all smiling. It is quite a coincidence that he is here, let him know. The Akzo Nobel employee is in London for a conference and his hotel is nearby, hence. 'I do not see this happening so quickly in the Netherlands,' he says. 'But I was a bit in a party mood,' he says radiantly, referring to Feyenoord's cup victory on Sunday.

Lorinda Kamerman and her friend Tatiana Lesnikow have made a special detour to celebrate the arrival of the royal baby at the hospital. The two Americans live in the neighborhood and walk around this time with their babies. 'It is extra nice that it is a boy, says Kamerman, who, like her friend, has a son. Hers is four months old, Titiana's seven months.

No, Kamerman and Lesnikow will not travel to Windsor next month for the wedding of Harry and Meghan. But it is of course nice to have an American in the royal family. That makes it even more special.

Tyler is 'absolute' of the party in Windsor. 'This is a top year for the royal family. That many more may follow. '