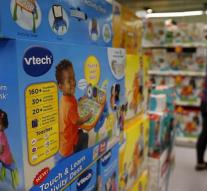 - Toy manufacturer VTech has hired the American security company Mandiant to protect its systems after the recent hack in which profile information of some 6.4 million children were stolen.

VTech works together with law enforcement agencies in the investigation of the attack in which the data of a hundred thousand parents and over 120 000 profiles of Dutch children were captured.Mandiant, at the end of 2013 was taken over by his American rival FireEye, will also look at how VTech handles customer information and will advise how the security of these data can be strengthened.
NEW