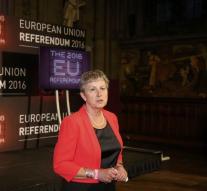 london - Chairman of the Brexit camp, Gisela Stuart, looking with satisfaction at the outcome of the referendum on whether Britain should remain in the EU. She is delighted that people have had to write anything by the establishment.

,, I think it is a responsibility for us as politicians to act in the best interest of the country. So stay calm, take thoughtful steps but put the process into effect, '' said the Labour MP Stuart.

Britain will themselves not according to insulate it from the outside world.,, We will work with European partners, we will as before continue to work at international level. It is simply the democratic (EU) governance structure we have rejected. It's not out we rejected the look. ''