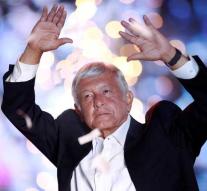 mexico city - While the main problems in Mexico seem to be getting bigger, about 89 million eligible voters can elect the president, parliament and thousands of other executives on Sunday.

The big losers seem to be the parties that have ruled the country since the collapse of the seventy-year-old one-party state in 2000. These are mainly the old, center-left Party of Institutional Revolution (PRI) and the right-wing economic liberal PAN (National Action Party).

Favorite is the leftist nationalist presidential candidate Andrés Manuel López Obrador with his party Morena and his party coalition ('Together we make history'). He already tried to become president with his message that the establishment is corrupt and incapable. Many Mexicans believe that he is right, because in their view the liberalization and modernization of the economy has yielded little disappointment.

Around 45 percent of the population is still very poor, especially in the south. And in the meantime, drug crime seems to get completely out of hand, with tens of thousands of killed victims of criminal violence per year.

According to polls, voters seek a way out in the very unpredictable and populist Obrador content. For example, José Antonio Meade (49) of the center-left PRI and Ricardo Anaya Cortés of the center-right conservative PAN would be losers. The polling stations open our doors in the main part of the country at 3.00 pm and close at 1.00 am on Monday (with us).