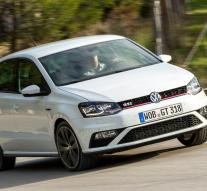 wolfsburg - Automaker Volkswagen may tinker with the German regulator to approximately 460,000 small cars affected by the diesel scandal. Through a number of adjustments will the cars that are equipped with 1.2 liter diesel engine as again meet the legal requirements in the Volkswagen Polo and Seat Ibiza.

Owners of the cars will be asked to contact a workshop so that the vehicles can be customized.

In September 2015 it was revealed that the German automaker on a large scale had manipulated the emissions from cars by using sjoemelsoftware. Worldwide, these are millions of cars.


Volkswagen had previously indicated in a letter to customers that it would start in late May with the adjustments of the smaller diesel engines. This was later postponed.