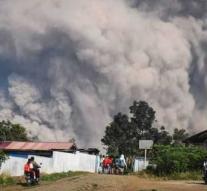 jakarta - The Sinabung volcano on the Indonesian island of Sumatra erupted and spits five kilometers of clouds in the air. Also hot lava flows from the slopes since the eruption of the mountain Monday. According to the authorities there are no reports of victims.

The regional advisory center for volcanic ash in Darwin did give a warning to airlines.

The volcano is one of the three currently erupted in Indonesia. The Sinabung was dormant for four centuries before exploding in 2010 and killing two people. A new eruption, in 2014, killed sixteen people, while seven died in an eruption in 2016.