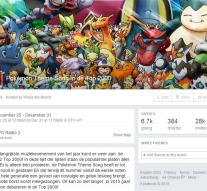 amsterdam - Pokemon fans doing a frantic effort to theme song Pokemon Gotta Catch Them All , to get into the Top 2000 .

The organizers write the song " a sense of nostalgia gives a whole generation and by many lustily sung can be. "

Therefore the three organizers (and their more than 6,000 fans) in 2015 as the year for the debut of Pokémon in the Global 2000. The event calls everyone to the opening of the ballot boxes " Gotta Catch ' em All " by Jason Paige in to fill in the free choice.