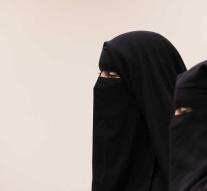 geneva - The UN human rights committee has put France on the finger because of the burqa ban that the country introduced in 2010. Following complaints from two women who were fined, the committee concludes that the ban is contrary to human rights.

According to the UN organization, the prohibition of a 'disproportionate way' harms the right of women to express their faith. 'The two women were fined in 2012 because they wore face-covering clothes in public. They joined the committee in 2016. That gave France 180 days to report what it did with the decision.