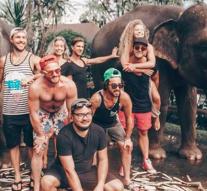 toronto - Three young adventurers were dumped in a waterfall in Canada and died. The trio reported on their travel adventures via social media, the BBC reports. They are part of the High On Life group, which has 1.1 million followers on Instagram and over half a million subscribers on YouTube.

Ryker Gamble, Alexey Lyakh and Megan Scraper were killed earlier this week at waterfall Shannon Falls in British Columbia. Witnesses stated according to the Canadian broadcaster CBC that Scraper slipped near the waterfall and landed in the fast flowing water. The two men would then have come to her aid.

The police say the trio has been thrown 30 meters down. Other members of the group reacted shocked to the death of their friends. 'They were three of the friendliest, most driven and extroverted people you could ever meet,' says High On Life.