Home / Tech / Vlogger PewDiePie through the dust to 'nigger' 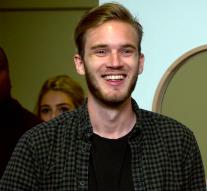 - YouTube star PewDiePie has apologized for shouting the word 'nigger' in one of his movies. The 27-year-old Swede, who is really called Felix Kjellberg, thinks he should not have said it.

'I said it was in the hottest battle', the internet star apologizes for a new movie. 'I said the worst word I could have imagined, it just flopped out. I'm just an idiot, but that's not what I said. It was not okay. I'm really sorry if I offended or disappointed you. '

In the controversial movie, PewDiePie played a shooting game and he scrapped a fellow player for nigger. Earlier this year, the Swede, who has more than 57 million followers, also came across when he made anti-Semitic jokes in his movies. Disney and YouTube decided not to do anymore business with him.