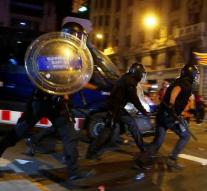 barcelona - The police in Spain met with Catalan demonstrators in Barcelona Monday evening. The demonstrators, who want independent Catalonia, tried to take the regional parliament in Barcelona but were eventually swept away by the Marechaussee.

It meant a violent and tense end to a day that had begun with peaceful demonstrations. A year ago, a majority of the Catalans voted for independence in a referendum. But there was a baton for Madrid.

First in Barcelona in the late evening tensions arose for the headquarters of the National Police. Then the demonstrators went to the regional parliament of the province of Catalonia.