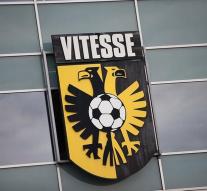 hilversum - At the Vitesse football club Monday a new abuse case of an old youth player has been reported. The potential victim's father identified the case and hopes that the club will bring his son into contact with another victim, Renald Majoor. That's what Vitesse director Joost de Wit said in the television program RTL Late Night.

On Saturday, the Volkskrant wrote about sexual abuse of youth players from PSV and Vitesse, including Major. He was assaulted as a 12-year-old pupil in 1996 and held for a night by his team leader of the C1.

Major has been around for twenty years and only came out after publicity about the abuse scandal in Britain, where more than a thousand youth players were likely to be victims.

Vitesse is going to investigate the father's report. 'It is our intention to make it debatable,' said De Wit. The honorary club wants to break the silence around assaults and rapes in football.